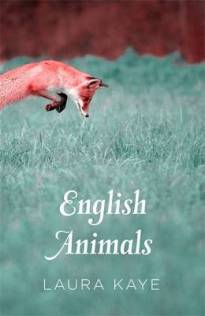 I follow a handful of book critics in the UK and heard them raving about this book’s “charm” and ease of prose.  I was intrigued because it is about a young Slovakian woman who relocates to the English countryside to work for an English couple who run an estate that they open for wedding and hunting seasons, even though they can’t really afford it.  The critics raved about how much they enjoyed seeing an outsiders perspective into a distinctly English couple surrounded by distinctly English traditions; because I am American and have never been to Great Britain, I thought it would be interesting.  I also thought it would be fun to get my hands on a copy because it is not available for print or digital purchase in the States.  Luckily, I have a family member willing to pick up a copy for me during their upcoming travels to London.

Kaye’s writing style is so easy to read that I could see reading this in two or three sittings.  She writes around a lot of truths of tradition vs modernism in our society, and stretches the reader to see both sides of the same coin.  The story is quirky, but I think it holds value worth considering.

“Interesting” is definitely an accurate description; so is “odd” and “timely”.  From my point of view, this is one of those stories you either love or … dislike.  On the one hand, I would put this story into the category of family drama, or maybe even chick lit, which I don’t always tend to care for.  There are some things about this book that I could see making some people uncomfortable (taxidermy… discrimination… sexuality…), but on the other hand, the story made me stop and think about what it means to be human and some of the absurd social conventions we have adhered to, hence the word “animals” in the title.

The situations that the characters find themselves in illustrate the clash between conservative tradition and modernism which, while distinctly “English” in this story, serve as an allegory for any modern culture.  The main character is very vulnerable – she is young, female, alone in a new country whose language is not her first, she is minority, lesbian, and there is no talk of her having any skill, thus her choices for employment are fairly limited. That said, she is clearly intelligent and finds herself in a very believable situation that is unhealthy, all because she is trying to find herself and live authentically.  My favorite thing about her: she took a not so great situation (that would have driven me mad) and made some serious lemonade outta those lemons.  She acquires a skill, financial stability, and discovers a passion that wasn’t even in her world view before arriving at the estate (I had no idea that taxidermy was such an art).

Note: this post was not sponsored in any way.