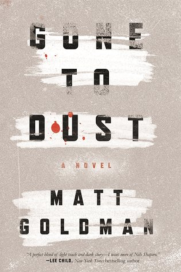 I saw a review of this book in the local paper that raved about this debut novel from Matt Goldman back in early August.  Y’all know how much of a sucker I am for a strong, well-written debut novel, so I put it on my list.  Then, like magic, I received a free preview from the publisher (thanks!) about 24 hours before it was set to release.  I was beyond excited, so I sat right down to gobble it up and…

I was so not into it.

I put it down.  I circled around it, wanting so badly to enjoy a hard-boiled debut of a hard-boiled detective.  I nudged it with my toe, asking it to be awesome.  The dry banter between the narrator and the other characters was just rubbing me the wrong way because it felt forced and obligatory, and I was apparently having none of it.

I left it alone for a month, and picked it back up over the weekend (after it had time to think about what it had done) and I am so glad that I did.

The story is told through the voice of Nils Shapiro, a private detective in frozen Minnesota, who finds himself supporting the local police on the murder of a woman who was found in her home, in her bed, covered with dust.  Most of the house is covered in this dust, obliterating any DNA evidence that might otherwise be discovered.

Full disclosure: I think its time you know that I hold two degrees in Forensic Science and used to work on crime scenes.  I admit that this approach to “covering your tracks” is a flawed one, but I greatly appreciate where the author is going here (although, I don’t recall anyone on the scene sneezing…).

I am so intrigued by this story.  Shapiro seems so down-to-Earth, and so… authentic.  He speaks plainly in a way that saying someone “speaks plainly” is a compliment.  He has a dry sense of humor and calls it like he sees it, and I really want to have a beer with him.

The preview was the first 6 chapters (I estimate to be roughly 50 pages), so I have not had enough time to gauge the plot, but it looks very promising.  I greatly enjoy Shapiro, and look forward to reading the rest of the novel.  Characters like his are the kinds that stand the test of fictional time, and I wonder if there will be more novels for him the future.

Thanks to NetGalley, Forge Books and the author, for the preview in exchange for my honest review.